Topaz is the kind of stone that actually displays a rainbow of colours in its varieties. A large number of minerals and stones were previously believed to be topaz until the more sophisticated instruments of testing got into operation. Topaz is the trade name of a number of other gemstones that do not even belong to the family of this versatile gemstone. This stone is liked the most in its colourless avatar. Blue topaz looks like aquamarine which is actually a quartz. Citrine, another quartz, is so popular by the name yellow topaz that very few people who have citrine know that their collection does not contain topaz but a quartz member. A beryl family member, green in colour, Chrysoberyl, is also sometimes confused with green topaz.

Most of the deposits of the world are characterized by the colour of topaz which they are believed to have. Blue and bi-coloured topazes are found in Jequitinhonha Valley and Espirito Santo in Brazil and Ural mountains in Russia. Gem pegmatite of San Diego County tops the list of topaz deposits worldwide. Brumado in Bahian is famous for giving pink topaz to the world. Yellow topaz crystals are unique of Saxony, Germany region; other regions considered important for topaz mining comprise of, but are not limited to, St Anne's mine of Zimbabwe, San Diego, and Nigeria.

Topaz can induce lot of calmness to the mind. One can enjoy the happy moments of life better and move towards better from current state by wearing topaz jewellery. This stone is so positive in nature that even sterile women are advised to wear this gemstone to increase the possibility of having a baby. This is also considered the stone of youth among men who want to push further the occurrence of their old age. Because of its ability to expel negative thoughts and increase concentration, it is used as a stone for meditation.

Topaz, at present, has even been robbed off his name by a quartz member citrine that is being sold a lot to gullible customers. This gemstone, so pure and pricey, is hit upon badly by the availability of citrine in abundance and the striking similarity between the two.

Topaz exhibits rare phenomenon of the presence of two distinct colours in the same stone. This property makes it appear more beautiful than other contemporaries. Lapidaries employ variety of cuts on this gemstone to bring out its natural beauty in more accentuated manner. Rectangle table cuts and checkerboard cuts are very popularly used to create artistically appealing topazes. These are also cut in oval and rectangular cushion shapes and find a respectable place among the collection of curators who love to collect perfect gemstones for their much loved collections. 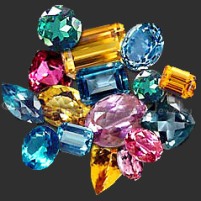