Spinel, since time immemorial, seems to have followed ruby like a ghost. Previous names such as Balas Ruby, Black Prince Ruby and Timur Ruby are all indicative of the fact that this gemstone was quite a favourite among royals who used this gemstone for jewels and crowns thinking it to be ruby. Very colourful red hue with orange tone makes it look sometimes even more beautiful than ruby. In fact, actual spinels are so rare that these adorn the beauty of museums and curator's collection. Spinel is found in large number of colours; of all these, blue spinel is something that is beyond the reach of even the most maverick of collectors.

Spinel could not gain much footage in gemstone world because these were too rare to gather any fan following. Sellers could not get much price as expected because these simply lost the demand due to unavailability and so the fan base drifted towards ruby that was just similar in appearance and better in colour. Still, those who can pay anything for possessing the best variety prefer to go for Burmese spinels that display the most appealing colour.

Magnesium aluminate is what spinel is made of, chemically. Magnesium, when replaced with manganese, zinc or iron produces large varieties of spinel. Manganese spinel is popular as Galaxite, Zinc spinel is given the name gahnite while iron spinel is christened as hercynite. All these varieties are found only in the collection of gemstone collectors who want to have the rarest of the gems in their kitty.

Spinel now resides only in museums and royal collection of UK where it was brought after foreign invasion and loots. This gemstone is the reason for number of invasions and conflicts as everybody wants to display power and supremacy by acquiring the unique from the poorer rival. Timur Ruby, as the world knows, has gone from one conquistador to another before getting the place in Queen Elizabeth's collection. This gemstone lying in the collection of Royal Queen at present has the names of all the previous owners inscribed on it.

Another spinel called Black Prince Ruby was believed to be so precious that it actually was used as a price for funding an entire army operation. Such is the rarity of this gemstone and so engaging are the stories based around it. That is why, this gemstone was employed in making of all the royal crowns and jewels that belonged to filthy rich rulers commanding lot of supremacy. 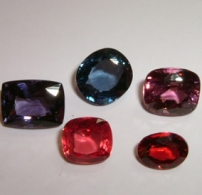