Garnet is versatility unleashed in a gemstone and is known for large variations in cuts, colours and yes, of course names! Chemically, this gemstone may be divided into 20 varieties and all these varieties can be considered unique gemstone because of the vast uniqueness they display in makeup and overall look. Almandine, rhodolite, tsavorite, pyrope, uvarovite, andradite, hessonite, demantoid, grossularite, spessartine are few of the distinct varieties found in Garnet family.

Garnet is certainly a jewellery makers' best companion as it provides variety of styling option to the designers who want to create colourful gemstone jewellery. Garnet members owe all their distinctiveness to variations in specific gravity, refractive index etc. Because of the small differences in these features that a garnet gets the name as well as identity that it deserves. Garnet colours range from brownish red to brownish orange, reddish to purplish and even green. Such versatility in colours can help a buyer build a very colourful collection of eye-catching jewellery. You can experiment a lot with garnet by mixing it with other important gemstones for developing mixed variety of jewellery.

Garnet has very appreciable healing properties. Red variety of garnet is used to cure depression and also to provide much desired boost to business revenues. People using natural sources of healing make use of garnet stones and place them on the heads of subjects who want instant relief from the feelings of anxiety, depression and unworthiness. It certainly induces the feeling of self-worth in a being and helps to have high levels of purity and clarity in thoughts.

Spessartites - These are orange-red variety of garnets that were popular as mandarin garnets. Soon after they were found near Kuene River, these got lost under the pressure of high mining costs but soon made the headlines with newly found deposits in Namibia.

Grossularite - Found first in Mali, these had to struggle hard for identity due to green colour which was considered almost impossible in garnets. These green coloured garnets when rediscovered in Russia, India, Tanzania, Central and South America got the name of Tsavorites which were later found to be nothing else than grossularites.

Pyrope, Andradite, demantoid, topazolite, melanite, rhodolite, uvaroite, hessonie etc are few of the distinct varieties of garnets that can be discussed separately as distinct gemstones.

Colorado Ruby or Cape Ruby are actually the misnomers used by deceitful sellers to command higher prices for red coloured garnets. These do not have anything to do with Ruby that is the most respect commanding member of gemstones' world. 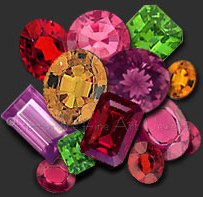