Apatite has got attention of gemstone collectors because of the clarity and transparency which makes it a desired addition to repertoire. It does not have much ornamental value because of poor hardness and jewellery pieces like pendants, brooches and cufflinks, that are worn only on special occasions, are made of it.

Apatite comes closer to variety of gemstone species like sphenes, topazes, beryls and tourmalines in appearance. Therefore, it got the name of 'deceitful stone' and was sold a lot by sellers in the name of tourmaline that is closer in look but much lower in value.

Apatite has found its use in dental cosmetics because of being made of same two minerals - calcium and phosphorus that are considered the makeup material for our teeth and bones. Its main shades include green, light blue, red, leek-green; it is also found, though rarely, in purple, violet and dark blue variety. It fails the scratch test when compared with the precious stones that it resembles and so this is an easy identification procedure for keeping it apart from more prestigious gemstones.

Apatite is very much famous for its cat's eye variety and displays distinctly rutile-like inclusions. It is categorized among included gemstones and displays type II level of clarity. Rutiles are, however, visible in higher carats only and so the larger pieces fetch better price, something that is natural to expect.

Apatite is quite famous for its typical blue variety that is now popular by the name 'moroxite'. This gem scores very high on aesthetic appeal and easily gets the seller price that he wants. Cat's eye effect is very beautifully displayed when this stone is cut en cabochon and thus, one can sell it easily as a rare gemstone.

Apatite competes fiercely with Paraiba tourmaline that is exactly the same shade as the light green of the former. It is known by various names such as 'asparagus stone' and 'Madagascar Apatite'. Of these, Madagascar variety is sold a lot because of its plush blue-green hue. Brazil is known for having blue coloured apatite and this variety is also worth collecting.

Apatite can make the wearer voracious for knowledge. He feels great attraction towards new lines of knowledge and learns things faster. He is able to put better questions and extract the best possible information from the sources like teacher or coach. Metaphysically, its calcium and phosphorus content makes it useful for curing bone and teeth ailments too.

Apatite jewellery should not be worn doing kitchen work. It is surely a party stone and therefore, used in making brooches and cuff-links that are normally worn in gatherings and formal occasions of social importance only. 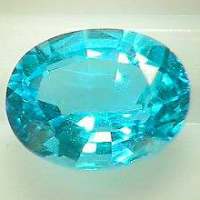